The front derailleur or front mech is a cage mechanism that is responsible for moving (nudging) the chain laterally from one diameter chain ring to an adjacent chain ring of a greater or lesser diameter. This is achieved mechanically by increasing or decreasing tension on the front gear cable via the front gear shifter, which is usually positioned at one end of the handle bar close to a brake. The front mech is thus prevented from slipping laterally because the cable is under constant tension dictated by the front gear shifter. 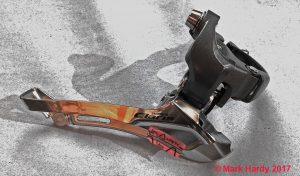 The chain therefore passes through and between the two parallel arms of the front mech. 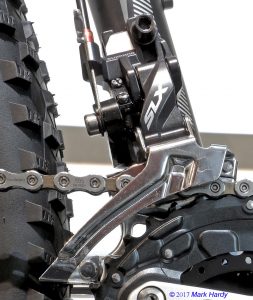 The front mech is usually found clamped around and near the bottom of the seat tube, and is positioned such that it sits proud of the top of the largest chain ring. This enables it to move laterally, without contacting the chain ring or other part of the cycle. The chain is the only part that the front mech needs to contact.

Most cycles have a clamped or band-on front mech. On some road bikes with non circular section tubing, the front mech is bolted on to the seat tube and is still known by the original name of brase-on. 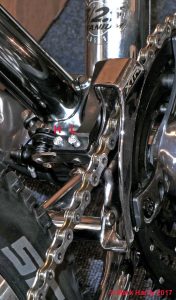 There are several brands and qualities of front mechs. Names such as Shimano, SRAM and Campagnolo are the most commonly seen on cycles of quality. Each brand name will boast front mechs of different qualities and price points. For example on road bikes, a Shimano Claris front mech is designed for a lower number of sprockets on the rear cassette than is a Shimano Ultegra or Dura Ace front mech, and is usually found on more entry level road bikes. The Shimano Ultegra or Dura Ace front mech is found on higher quality road bikes. Differences in quality in the better front mechs are found in the areas of lower weight, better springs, stiffer materials, the bearing property of the pivots and the resulting responsive and accurate lateral movement.