It can be argued that on cabled cycles (99% of all modern cycles), that the metal cables are the key components in the gear system on normal pedal cycles because it is the cable that permits the front and rear gears to operate correctly.  As the gear system relies on tension to change the position of the front and rear mech, it’s the cable that supplies that tension, and by the same amount every time. The operation of modern cable geared cycles is controlled by such an uninspiring and often overlooked very basic component. 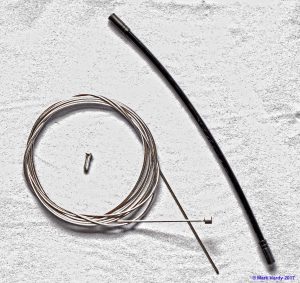 Gear cable is made of steel and is multi-strand rather like multi-strand copper wire. This means much more flexibility than a thicker solid core cable. The strands are wound spirally so that the cable remains intact and acts as a single cable. To prevent the strands from unraveling at the cable end, the end is spot welded. 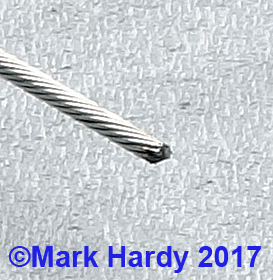 When fitting to a bike, a cable is cut to length, this then removes the spot welded end. A tiny metal end cap termed a cable end is then crimped over the end of the cable after fitting, which keeps the strands from unraveling.

Entry level and budget cycles may be made of galvanized steel. This is cheaper to produce and involves a coating of zinc to greatly lengthen the useful life of the cable before rust appears.

On higher quality cycles stainless steel cables are used. These are a little more expensive to produce but offer the advantage of being free from rust to a general degree because of the presence of chromium in the steel alloy. During the lifetime of a stainless steel gear cable (several thousand miles), corrosion is generally not an issue as the cable is replaced before corrosion is noticed.

One gear cable runs from the shifter, through lengths of cable outer to the rear mech and another to the front mech or front derailleur. Cable outer is a layered sheath, plastic on the outer side, stiffened internally by a thin steel stranded tubing, and a low friction surface, such as another plastic, on the inside surface that the steel cable runs against. 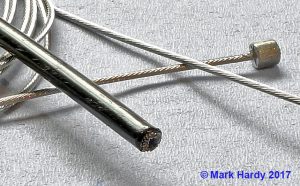 The construction of the cable outer is subtly different from brake cable outer in that the metal layer of the sandwich is laid longitudinally. In a brake cable outer the metal layer is wound spirally to increase the support strength of the outer. In gear cable there is a requirement for greater flexibility as the cable has further to travel and incrementally.  The cable outer also benefits the inner cable by protected it for much of its length against the elements. Stainless steel cable requires an easy path from start to finish in order to work smoothly. This means that when the cable and outer is routed through the handlebar positions and along and round the frame, it is advisable that the curves it describes en route are gentle and sweeping rather than sudden and acute changes of direction. 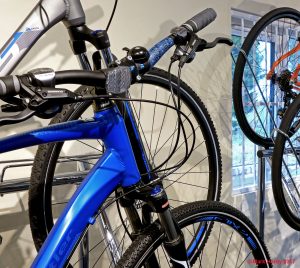 Changing gear is smoother and easier when the cable does not meet much resistance such as sudden directional change.

With mechanical index shifting of the rear mech, the cable is tensioned or relaxed longitudinally by the shifter by only a few millimeters typically. This is enough to pull or relax the rear mech causing it to shift the chain laterally to a smaller or larger sprocket. The tension in the cable then keeps the rear mech in the same position. With the front derailleur (front mech) the system of cable tension, longitudinal relaxing or tensioning via the shifter and lateral movement of the parallel arms of the front derailleur is essentially the same. The tensioning or relaxing of the cable to the rear mech per index shift increases with a lower number of sprockets on the cassette. A five speed cassette requires a much greater longitudinal tensioning or relaxing per gear than does an eleven speed cassette.

Cable tension, the key to the precise operation of the gear system.

Cable stretches slightly over time and also when new. Re-tensioning of the cable is then required. The symptoms of a stretched cable are gears not indexing correctly, two clicks of the shifter when one should be correct, and sometimes a gear change on the cassette. This occurs because if the cable is not tensioned correctly, two clicks (index movements) at the shifter are required to take up the slack (so to speak). 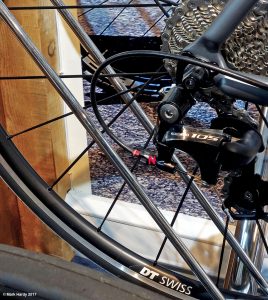 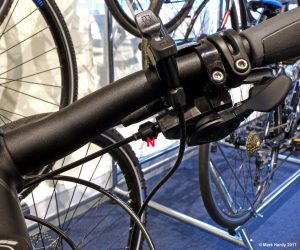 On some higher quality road bikes where the cable and outer is routed under the handlebar tape, separate nipple adjusters termed in-line adjusters are found situated close to the handlebars.

Some cable found on higher quality cycles is Teflon coated. This increases the smooth performance of the cable as it rubs against the inner surface of the outer. 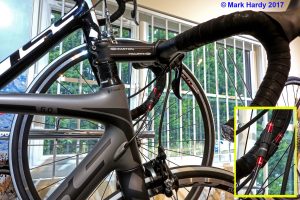 The downside of this design is that if these cables are not changed fairly regularly, the Teflon eventually breaks off the cable in tiny amounts and tends to clump at points along the routing. This then increases resistance to movement and makes gear changing more sticky. Luckily, cycles with this type of cable, such as higher quality road bikes, have regular cable changes during annual servicing, so the issue does not arise.