The Cassette. The Basics.

The cassette is the gear mechanism on a geared cycle. It is located at the centre of the rear wheel and consists of a group or cluster of chromium-molybdenum steel sprockets or cog wheels. Chromium-molybdenum is a steel alloy also known as Chromoly. Chromium adds to the hardness of the steel and helps to prevent rusting. Molybdenum increases resistance to abrasion. Chromoly sprockets are usually found on road bikes, better quality mountain bikes and some higher quality hybrid and electric cycles.

Budget and entry level cycles commonly use standard steel sprockets. Sprockets are then toothed wheels that accommodate the links of a chain. In this way, a chain transmits the power of the crank and chainset to the cassette and the rear wheel.

On an eleven speed or eleven gear cassette there are eleven sprockets. 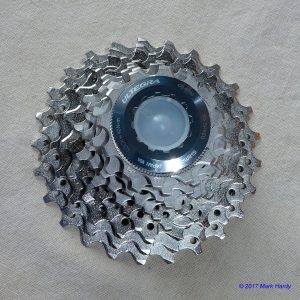 Shimano Ultegra road bike cassette. It is possible in the image above to count the number of sprockets and the number of teeth in the larger and smaller sprocket to identify and label the cassette in the way manufacturers do. Its a __ spd __/__t cassette.

The smallest diameter sprocket furthest from the rear cycle wheel has the lowest number of teeth around the circumference. The largest diameter sprocket is closest to the rear cycle wheel and has the greatest number of teeth. Cassettes are described then by the manufacture (Shimano, SRAM, Campagnolo), by the number of sprockets (number of gears) and numbers of teeth on the small sprocket (high gear) and large sprocket (low gear), e.g. 11-28t. Usually this information is imprinted on the cassette. Typically, the choice of cassettes for a road bike from one manufacturer can be 11-23t,11-25t,12-25t,11-28t,11-32t. On a mountain bike an 11-40t cassette is not uncommon. The higher the number of teeth on the largest sprocket, the easier the pedalling is. Of course this means that you are moving at a low speed as the wheels are covering a shorter distance along the ground for each revolution of the pedal. The advantage of a larger number of teeth on a larger sprocket is the easier ascent of hills on and off road, plus more control over rough terrain off road. There is an advantage (mainly for road bikers) of a cassette with a smaller large sprocket, e.g. 11-23t, in that the incremental change between sprockets when changing gear is less. This means that there is a smoother transition of pedalling difficulty as a rider goes up or down in gear. This is useful because the benefit of efficient matching of muscle use and pedal revolution can be maintained during a change of conditions (hill ascent or sudden headwind), to avoid tiring the leg muscles. This is cadence, a term important to cyclists as it refers to maximising muscle efficiency whilst pedalling, which in turn enables longer periods of constant pedalling before leg fatigue is felt.

How a cassette fits together and what it sits on.

A cassette can be made up of separate sprockets which are CNC cut so they can only fit in one orientation and in the right sequence in order for the gear system to work. They sit one above the other on a free hub (a ratchet mechanism on the wheel hub that ensures free-wheeling is possible). 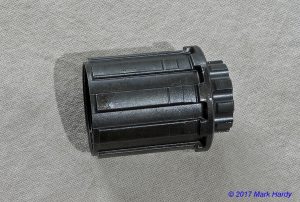 Shimano free hub body which has its own bearings and ratchet system to enable free wheeling.

The free hub contains its own wheel bearing system in addition to the wheel bearings. Most cassettes have spacer rings between some of the sprockets. This is to ensure that the gap between each sprocket is correct for the design of the shifter, cable, rear mech combination to precisely transfer the chain onto the adjacent sprocket when changing gear. Generally, manufacturers tend to have their own dimensional settings for their cassettes so they operate precisely with the other components of the drive train. Mixing drive train components from different manufacturers is sometimes possible between Shimano and SRAM, rarely between Shimano and Campagnolo, and usually not advised at all as a matter of course. Using a one manufacturer drive train is the smoothest and most error-free path to consistent gear change when you need it the most.

The profile of the teeth and ramps (curved insets cut into the outer face of the sprockets at interval) are designed for smooth gear change. The tooth profile on cassettes from different manufacturers can be seen to differ subtly. It is important for the tooth profile to remain the same for as long as possible. Abrasion slowly changes the profile over thousands of miles or with heavy use, and the chain links modify along with it by stretching and wear. A new chain on a worn cassette will slip. The ramps cut into the face of the sprockets were developed some decades ago to correspond with the introduction of index shifting. Ramps facilitate smooth down gear change (moving up to a larger sprocket). 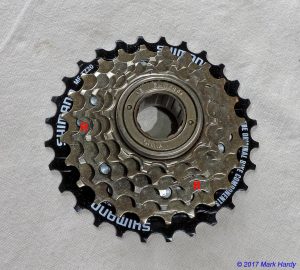 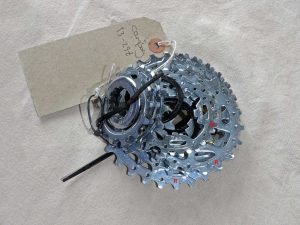 The smoother shifting of the chain to a larger sprocket is made easier because the chain grabs the teeth of the larger sprocket prior to letting go of the teeth on the smaller adjacent sprocket. The profile of specific teeth on each sprocket facilitates the action. The three main manufacturers trademarked their own brand of downshifting for marketing purposes. Names such as Shimano Hyperglide, SRAM OpenGlide and Campagnolo UltraDrive have been promoted for many years.

Cassettes of higher quality are commonly manufactured so that the larger sprockets are held together by rivets onto an aluminium alloy spline. The use of aluminium alloy as a spline platform saves a little weight that contributes to keeping a cycle as light as it can be. They then form one block of several sprockets. The smaller sprockets are individual and light enough to remain steel alloy. There are some cassettes however that are made up of individual sprockets. 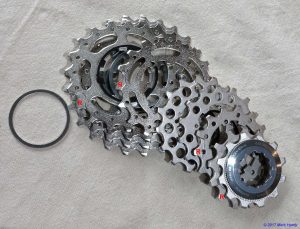 The individual and block sprockets have inner grooves or female slots (splines) that match corresponding male spines on the free hub body and thus can only be slipped onto the free hub in one correct position. The cassette is one of two similar gear change mechanisms used on cycles. The other is a freewheel. A freewheel is commonly used on entry level and budget cycles, and have smaller numbers of sprockets (5, 6, 7 or occasionally 8) in one block. 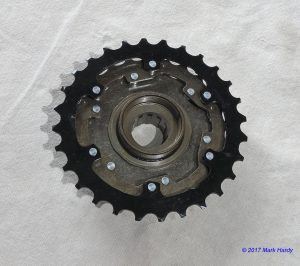 With budget cassettes and freewheels that use ordinary steel, it is important to keep them clean and dry as rust can form over time. This just adds to abrasion which then affects the grip of the chain. With chromoly cassettes, using a flossing action (rotating the cassette using the edge of a cloth between the sprockets), will remove most dirt and debris as most dirt collects between the sprockets rather than between teeth.  A cassette does not need to be oiled like a chain.