The Rear Mech. The Basics.

The rear mech (occasionally referred to as the rear derailleur), is the mechanism found near the centre of the rear wheel. It attaches to the frame at the point where the seat stay and chain stay meet. The function of the rear mech is to guide the chain from the bottom of the chain ring, to a chosen sprocket on the cassette. It achieves this via two counter sprung pivot points, one where the rear mech attaches to the frame, and the other roughly at the mid-point of the mechanism. 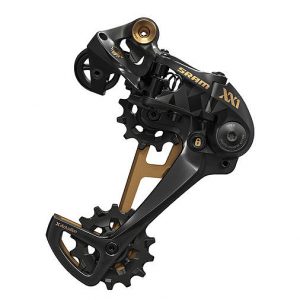 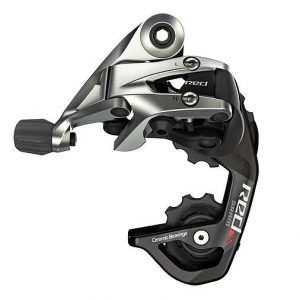 Tensioning of the gear cable pulls the cage containing the two jockey wheels laterally toward the rear wheel of the cycle and simultaneously downward so that the chain can be fed onto a larger sprocket (lower gear). In both directions, the movement is counter-sprung by the two springs to keep the cage in its desired location until another gear change is activated. Relaxing the gear cable results in the cage relaxing (the counter-spring pulling it back), and moving laterally away from the rear wheel of the cycle, and simultaneously upward so the chain is deposited onto a smaller sprocket (higher gear). It can be seen then, that the rear mech system operates due to counter-sprung cable tension, which in turn permits the jockey wheels to feed the chain onto the cassette. 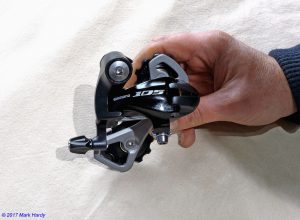 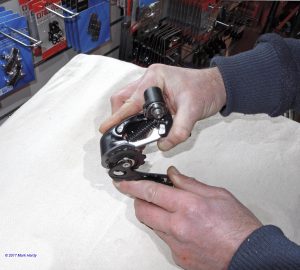 The counter-spring situated at the point where the rear mech attaches to the frame, also takes up the chain slack between the bottom jockey wheel and the chain ring on the chain set. This means that during pedalling, the amount of slack, (or low tension of the chain), between chain ring and bottom jockey wheel is the same for every sprocket on the cassette. The amount of chain slack required is determined by the combined diameters of the chain ring and the largest sprocket on the cassette. This is dealt with by the cage being a particular length and the jockey wheels being a particular diameter. For example, on a cycle with a cassette that has a smaller number of teeth on the largest sprocket e.g. 26t and a compact chainset, the required length of cage may be a Medium cage. A standard chainset and a cassette with a large sprocket of 32t may benefit from a Large cage. 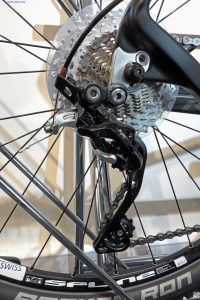 In order for the jockey wheels to operate efficiently, they must be able to rotate freely and thus have bearings that facilitate this property. On entry level cycles, the rear mechs typically have jockey wheels that have simple bearings that are no more than a metal sleeve rotating in a lubricated plastic outer. 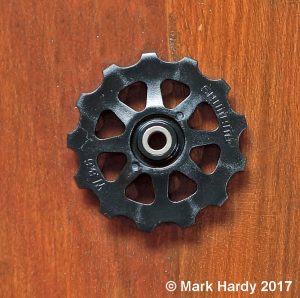 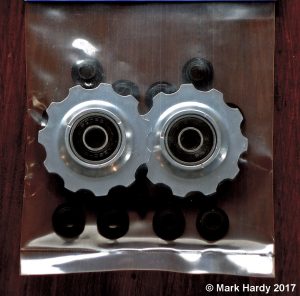 On the highest quality rear mechs it is usual to find plastic or even aluminium jockey wheels that contain press-fit ball racers as bearings.

Similar to the front derailleur, there are two small screws on a rear mech that set the upper and lower stop positions. These are the positions that prevent the rear mech from lifting the chain past the largest sprocket and into the wheel at one end of travel, and at the other end of travel, dropping the chain off the smallest sprocket and trapping it against the frame. 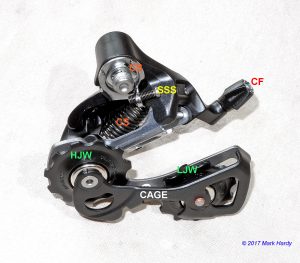 A rear mech also has an extra single screw.This is set to the position where the rear mech is wrapping the chain snugly around the sprockets.This provides a more positive gear changing from a small sprocket to a larger one.

The quality differences seen in rear mechs are in the areas of jockey wheel bearing efficiency, pivot point engineering tolerances and resistance to corrosion. 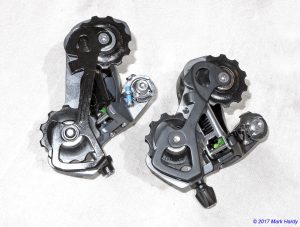 Shimano Claris and 105 rear mech. Are the quality differences obvious?

Some modern high quality road bike rear mechs are manufactured using carbon fibre. This is for weight saving. Road bikes at the lower end of the weight scale (<8kg) are desired by professionals and every little helps. 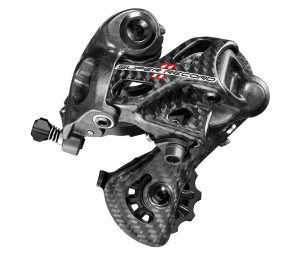 Rear mechs are hardy resilient mechanisms, but eventually can fail from corrosion and stiffness at the pivot points, wearing of the spring rubbing against metal, and slacking of the jockey wheel bearings. Jockey wheels require a small amount of lateral movement but bearing wear introduces tilt and waggle. With the chain removed, if the jockey wheels tilt and waggle side to side when spun by hand, it is usually time to change them.

The vast majority of factory built cycles use rear mechs from manufacturers such as Shimano, SRAM and Campagnolo (road bikes only).